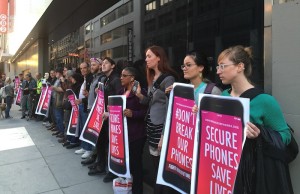 Line of protesters demanding Apple to crack open the iPhone at the center of the San Bernardino investigation.

Apple has unlocked iPhones for authorities at least 70 times since 2008. Google celebrated Internet Safer Day earlier this month to raise awareness of ‘how they can help you stay secure online’.

Tech companies have been battling relentlessly with governments over access to people’s electronic information.

Last Tuesday rallies were held across the US to protest the FBI’s demands that Apple unlocks the iPhone at the center of the San Bernardino investigation.

A week before protests were held to support Apple, with campaigners gathering in front of Apple stores with branding signs and slogans, “Don’t break our phones”. Read the full story here.

Apple CEO Tim Cook announced that the company wouldn’t comply with a government search warrant to unlock an iPhone used by one of the San Bernardino shooters.

The case has placed technological security in the spotlight, with Apple acknowledging it could extract the information.

Apple defended itself in the San Bernardino case, with Cook stating the action as, “an unprecedented step which threatens the security of our customers.” This contradicts their previous stance, as Apple has unlocked approximately 70 iPhones for authorities in the past.

However, the U.S. government has taken things to the next level, by pushing Apple to create new code which would allow the government to bypass iPhone security protections.

Some argue this is an ethical dilemma when government agents are forcing individuals of a private company to perform a task, where the employee is stuck between keeping their job and abiding by the government. Read the full story here. 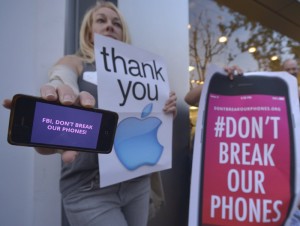 It is not all doom and gloom with the tech corps still keeping the public in mind.

Earlier this month Google celebrated Safer Internet Day with the redesign of its ‘Good to know site’, which is all about how to stay safe online.

The website launched late last year and is the search engine’s biggest consumer education campaign. Focusing on the web safety, dangers of the internet, scams, along with advice on how to keep your devices secure. Read the full story here.

But can we depend on tech giants with our personal data, do they really have our interest at heart, or is it just about public relations?

Apple further argued in the above case that extracting the data could threaten consumer trust and tarnish the brand.

There are blurred lines between private information, public security, and government control. For now, there’s not much we can do other than taking appropriate precautions online and being aware of what’s happening in the tech world, to defend our rights if we need to.

Dedicated Internet provides bandwidth capable of ensuring Quality of Service for crystal clear Voice over IP as well as content streaming.
More About Dedicated Internet
© Copyright 2022
Back to Top