Today faster connections well over 100Mbps are becoming more common, and end users expect to test they are receiving the amount of speed they are paying for. When testing a connection faster that 100Mbps you may be surprised that accurate internet speed testing can be limited or affected by several factors. 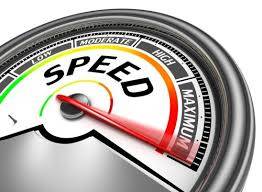 2. Wi-Fi will almost always test slower than actual. This is due to wireless speed limitations, signal strength and packet loss
3. PC/Firewall/router duplex settings
4. Browser or device slowness (Cache)
5. Old cabling and patch panels limited to 10Mbps or 100Mbps
6. Slower 100Mb switches in between you and the core network switch, firewall or router
7. Other bandwidth traversing in/out from your networking to the internet needs to be factored into the math. For example, on a 100Mbps/100Mbps circuit and test your current usage lets say is about 20/50, your speed should reflect about 80/50.
8. Testing server speed limitations – Because testing servers are free, some companies do not like to pay for upgraded networks, servers and maintenance or additional bandwidth and so they limit the bandwidth for example to 50Mbps or 100Mbps. This bandwidth pipe will be shared across all network tests hitting that server at the same time, and that can be hundreds or thousands of simultaneous tests at one time.
9. Testing server test limitations – In most cases the testing servers are just not capable of testing speeds over 100Mbps per connection or test and when multiple tests are being run. The testing server or network is not capable of sustaining the many concurrent testing requests.

If you try internet speed testing using different speed testing systems, you will notice inconsistent results. This can be due to the current testing server load or software, geographical location of the server, or network configurations that may be different from the other servers.

Also, the most ideal way to test is to isolate out your network by connecting directly into the core switch or router and test from there. No other network devices should be connected during your test. This will rule out any local usage, viruses, or an incorrectly configured device. Read more on our website or test our network speed

Here are some approved testing servers: